The concept of Scope refers to where an object is valid, i.e. where it can be uniquely used. Sometimes referred to as its spatial region.

(*Note: The term Object is being used interchangeably for variables, etc)

An object is not valid until it has been declared.

An object becomes valid from the point at where it is declared.

Assuming no other same named object exists within the lower layers, an object with: 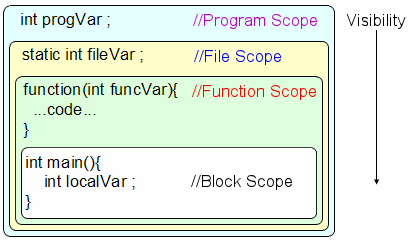 Notice that there is only one named variable called theVar. However we can uniquely act upon its multiple specific vales, depending on how and where it is declared and used.